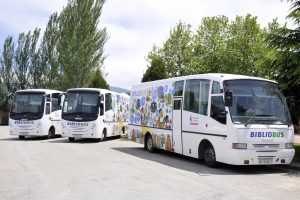 Service bibliobús Salamanca will tour the province of the 28 January to the 6 February, accompanied by 18 the show features microteatro 'Read it gives you wings', The foul-mouthed by.

The delegate of the area in the Provincial Culture, David Mingo, and Gloria Hernandez, Representing La Malhablada, They have announced this initiative to be held on the occasion of the Day of the bookmobile.

If in previous years this celebration allowed the province carry different workshops, This time the organization has opted for the microteatro, specifically for a show starring Raquel Barbero and Penelope Taberah that delves into the importance of reading.

Gloria Hernandez has reflected on the value of creating habits among younger readers to "encourage reading, the imagination, the creativity", promote this hobby helps citizens become "more empathetic, more respectful and see the world ".

The work will reach 17 different municipalities in the coming days. Concretamente, will raise the curtain on 28 January in Valdelamatanza, Lagunilla and Montemayor; and will follow a day later in Aldearrubia, Aldealengua and Arabayona.

already February, the day 3, You will pass the Payo, Navasfrías and Robleda; the day 4 by Miranda, Sotoserrano and Linares de Riofrio; the 5 for Babilafuente, two-one sessions at school and another at the College-, and Villoruela; and end the day 6 Huerta, Villoria and New Naharros.

David Mingo explained that the theatrical performances in each municipality will coincide with the passage of the bookmobile, without either be before or after performing the tasks traditional lending and consultation of books, and will take place in schools in each locality.