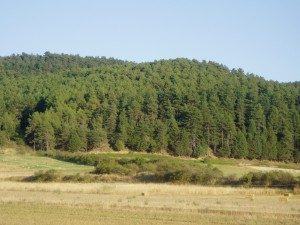 With the heat of summer the region of The Rebollar He has opened the season resin, field work in recent years has been losing workers largely because of the lack of subsidies and the poor performance of the sector.

In municipalities in the area as El Payo has gone from ten to three in just five years resineros, something that is also attributed to the temporality of work barely five months of production for eight work-and the difficulty, which it makes resineros opt for other professions.

Beatriz is one of the three tappers who remain in El Payo, but after five years he questioned its continuity: "In the end if you take insurance accounts between autonomous, I paid the City by renting pines and material costs, only ganas un jornalillo ". De facto, He admits that last season took 7.000 "Free" euros after five months of resinar 3.000 pine trees in full sun.
"If this could take many more machines pines and the sector would be profitable", claim from Navasfrías

Carlos, also El Payo, last year left the job because "every time down over the price of resin, There are many costs and few benefits. They should give more support because very beginning and you have to be paying the mountains license ".

However Luis, de Navasfrías, He believes that "the industry is as it was, even this year prices have improved but there are many people who have abandoned because to get something you have to work a lot ".

For this resinero El Rebollar solutions passing through the involvement of Europe through aid and the mechanization of work: "We are removing resin as he pulled almost in the last century, If this is machined could take many more pines and when the sector is going to be really profitable ".